The next morning we got up early and went to breakfast. Our hotel had breakfast included, and the breakfast was on the rooftop so we had some great views!

After breakfast we walked to the train station (the normal metro was broken that morning) to catch the Circumvesuviana train. As you might be able to guess, the Circumvesuviana train goes around (“circum”) Mount Vesuvius! Instead of going all the way around the mountain though, we were getting off at Pompeii! Getting the tickets was a little tricky since we don’t speak Italian, but the real issue was that the train was very crowded. Additionally, some of the signage was a little hard to understand – the train was very late and we weren’t really sure if we got on the right train. The train itself didn’t seem like it was in good condition either – lots of graffiti and the ride felt very rickety. But about 40 minutes later, we made it to Pompeii! 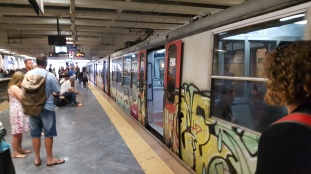 Pompeii is right near Mount Vesuvius, so the first thing we tried to do was to get a bus up to the top of the mountain. We started walking into the town of Pompeii, as I had read that the buses left from there but this was also pretty confusing – luckily, a bus stopped right in front of us, and the bus driver asked us if we wanted to go to “Vesuvio”, and we hopped on the bus. Once we were on the bus, we had to pay the bus fare, and the driver didn’t have exact change, but no problem – he pulled the bus over at a tobacco store, bought some cigarettes, and gave us our change back.  It was pretty funny to see. The bus driver then set off for Mount Vesuvius, and made it most of the way to the top. Apparently, there had recently been some rain so there was a chance of landslides, and the top of the mountain was closed. But we still got some great pictures overlooking Naples and the surrounding area.

On our way back down the road, in the middle of a traffic circle, a driver in a car started yelling at the bus driver, and both the bus and the car stopped in the middle of the traffic circle, yelling at each other (it initially sounded like they were about to fight each other). After a few exchanges, the car drove over and parked and the driver of the car hopped on the bus – while we were still in the traffic circle, with cars passing us on both sides. We’re pretty sure the driver was just trying to avoid a few tolls!

We stopped back at the train station, and had lunch at the restaurant there. It was quite good, and there was even a cat wandering around the restaurant, which Kelly enjoyed. We then went into Pompeii and listened to the Rick Steve’s audioguide tour – this was one of the first time we had used the Rick Steve’s audioguides, and it was great! There were so many small things and historical details we would have missed if we just were walking around on our own.

Pompeii was a Roman city that was founded in the 6th-7th century BC. At the time, it was near the coast and had a port for trading. About 11,000 people lived there when Mount Vesuvius erupted. Pompeii is close to Mount Vesuvius, but not close enough that it was covered by lava. Instead, pyroclastic surges – a mixture of ash, rock fragments, and hot air  – engulfed the city. There were signs that Mount Vesuvius was going to erupt before it happened, and some people did evacuate the city, but the people that remained had no hope once the eruption started. Pyroclastic surges can reach speeds over 300 miles per hour, and the hot gases can be up to 2000 degrees Fahrenheit. When the pyroclastic surge reached Pompeii, it was estimated to be 500 degrees Fahrenheit. Because of this, only about 4% of the people in Pompeii died because of falling rocks from the volcano – most died when the pyroclastic surge hit – either because of heat shock or because of roofs of buildings collapsing. By the end of the eruption, Pompeii was covered in 80 feet of volcanic material. The eruption added so much material that the coastline moved over a mile!

The city of Pompeii was eventually lost to history. It was finally rediscovered in 1748, and since then, the site has been nearly continuously excavated. Since everything was covered so quickly, many of the buildings remained untouched by weather until they were excavated, meaning they are in very good condition. Not all of the site has been excavated and a new fresco was even discovered after our visit! Pompeii also has a “sister city” nearby – Herculaneum, which was also covered in pyroclastic flows from Mount Vesuvius, and like Pompeii, the city is still in very good condition.

We started our visit near the old port of the city, where boats would come in – you can actually see the small stone pegs where they would tie up boats. Within a few minutes, we walked under the arch to enter the city, and everything looked both strange, and also familiar. 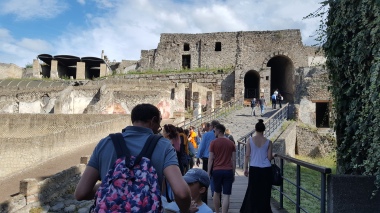 The roads were laid out in a grid (familiar) but the roads were also lower than the sidewalk at had these blocks in them. What we learned from “our friend Rick” was that the roads were also the drainage and sewer system, so often people would walk on the elevated sidewalk next to the road, and the blocks were there so people could cross the street – yet water and carts could still get by as well. There were even some roads where the cart paths were very worn into the rocks of the road. 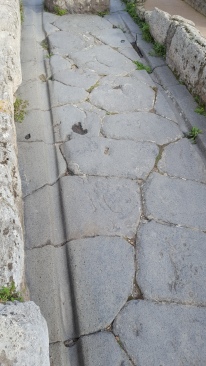 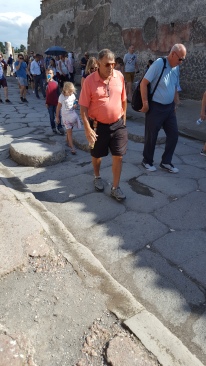 A few minutes later, we were in what was the public square. The remains of some of the old buildings and a few of the statues were still there. It’s almost eerie, because right behind the old town is a great view of Mount Vesuvius. 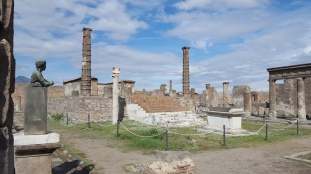 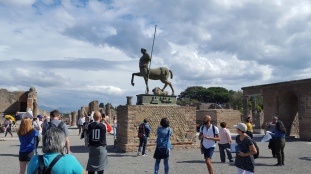 One of the buildings housed lots of pottery, and those pots are still there! 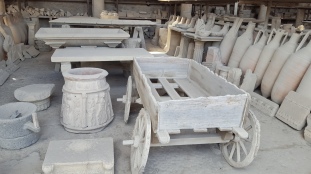 One of the most beautiful things about Pompeii are the tile mosaics – this one might not be the most elaborate, but I think it’s my favorite – it’s right at the entrance to someone’s house and below the dog it says (in Latin) “beware of dog”. 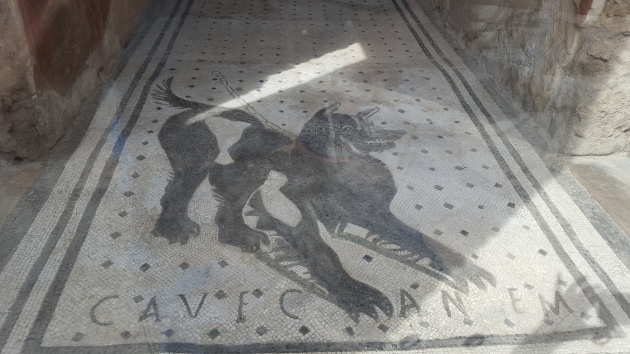 We also saw the old bath houses – they used to have public baths with both hot and cold water, and a steam room. Some of the detail on the walls is amazing.

They even heated some of the rooms by building a double wall, and heating the air between the two walls, and in the steam room, they designed the roof with ridges so the condensation would run down the walls and not fall on people in the room. 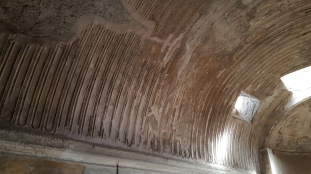 Outside of the bath house was the remains of a fast food shop – people could come and buy food at the counter, and it would be served directly from the bowl in front of you – the bowl would go into those holes in the countertop. We also saw a bakery – and the oven looked just like a brick oven might look today. 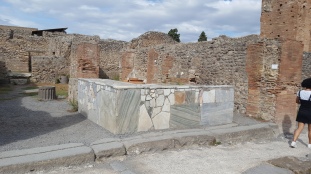 We also saw some of the more famous pieces of art – many were inspired by Greek mythology. It was really interesting to me that during the Roman times they were making art about Greek mythology, just was we might today. 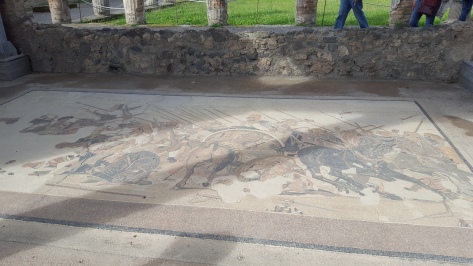 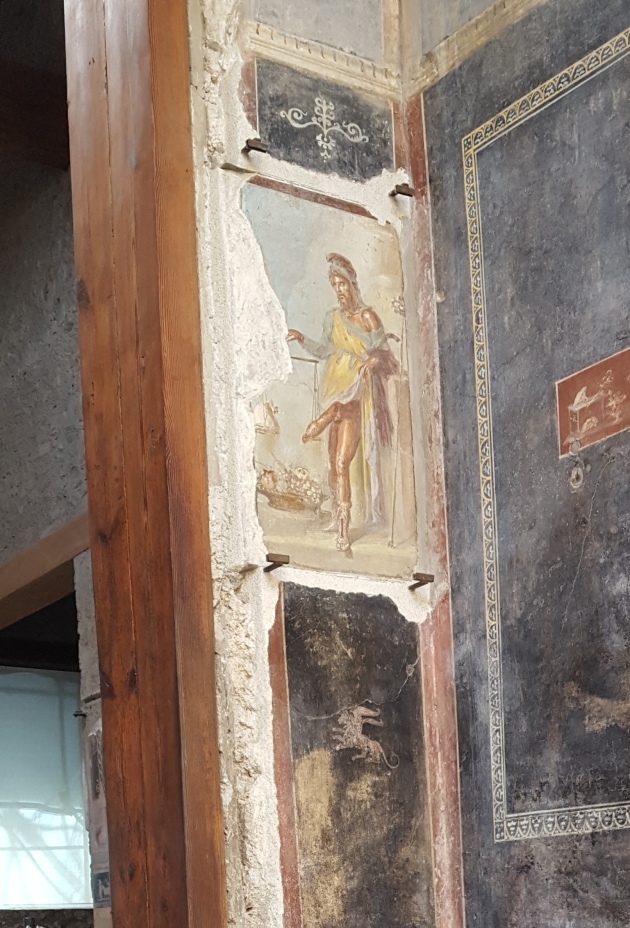 We concluded our visit by walking over to the large Roman theatre. 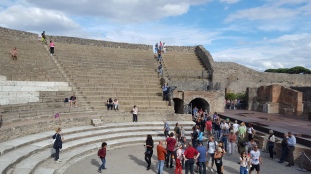 After a long day, we took the rickety Circumvesuviana back to Naples and ended up finding a great restaurant were the tables were outdoors in an alley – it was perfect!