On October 13th, Kelly and I woke up very early to make our way to the airport to head to Italy! We took the whole week off and traveled all around Italy, so they’ll be plenty more posts about this trip!

Normally we fly out of Charles de Gaulle or Orly, but when I booked the tickets for this trip, I saw some pretty cheap flights out of Paris Beauvais airport. It turns out Paris Beauvais airport is not in Paris, and it’s not particularly close to Paris either – from our apartment in Paris, it’s almost 100 kilometers (about 60 miles) away! Luckily, our flight was relatively early and it was a Saturday, so there wasn’t much traffic. There is a bus from Paris to the airport (which you have to pay for separately), so we took an Uber to the bus, and then the bus to the airport. Once we got to the airport though, everything was fine and we were able to get onto our plane no problem. So travel tip – if you’re traveling to Paris, you might want to avoid Paris Beauvais unless the prices are really cheap (and you have enough time in your schedule to travel to/from the airport). Here’s a picture from the Swiss/Italy border!

Our first stop was Rome, which (according to legend) was founded in 753 BC. Romulus and Remus were twins who were raised by a she-wolf. Romulus and Remus founded a city, but after an argument, Romulus killed Remus, and the city became Rome. However, there is actually archaeological evidence that humans have lived in present day Rome for the past 14,000 years, and that in the eighth century BC, a number of smaller towns were connected to each other, and that this could be considered the founding of Rome.

Since we didn’t have a lot of time in Rome, we booked everything we could in advance, and with a very tight schedule. We took a taxi from the airport to our hotel, dropped off our bags, and went over to the Vatican Museum. Since we had timed entry tickets, we got to skip the very long line and go right in, and right away, you’re surrounded by amazing art. Roman statues, Egyptian works of art and a beautifully decorated sarcophagus, and many paintings and tile murals. One side note – in the 1800’s, Napoleon’s forces took many pieces of art that had been in the Vatican Museum and brought them to Paris! 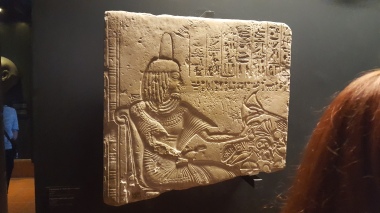 But of course the main attraction in the Vatican is the Sistine Chapel. On the path they laid out through the museum, you could really only go in one direction, and as we got closer to the Sistine Chapel, everything got more and more crowded, and we soon realized why. The hallway keeps narrowing to the point that barely two people could stand next to each other – meanwhile large tour groups and other people were all trying to go to the same place. It also started to get really hot – lots of people and very little ventilation – I can only imagine what it would be like during the summer!

After the narrow hallways though, we finally got to the Sistine Chapel. I hadn’t really seen many pictures of it before, and one of the reasons I hadn’t is probably because they don’t let people take pictures inside the Chapel (the pictures below are from the Vatican Museum website, here). Either way – I didn’t know exactly what to expect, I had just known that it was painted by Michelangelo. I’ll put it this way – it’s very overwhelming. All the walls and the entire ceiling are completely covered in incredibly detailed frescoes (paintings). If you took the time to really take in all of it, you’d probably need a few hours and a very tall ladder. The ceiling is high above you, and there are so many different scenes depicted in it. The paintings all have a lot of blue in them as well, which makes it appear as though you are looking into the sky. It’s an amazing, albeit disorienting room.

We then got some lunch at the Vatican (it was now close to 2:30 pm and we hadn’t eaten since 8 am at the airport), walked around one of the courtyards, and the walked around to Saint Peter’s Basilica. I knew Michelangelo was an amazing sculptor and painter, but I had no idea that he also helped to design Saint Peter’s. We didn’t have time to go into Saint Peter’s though, as the line was quite long, and we had to get to our next stop – the Colosseum! 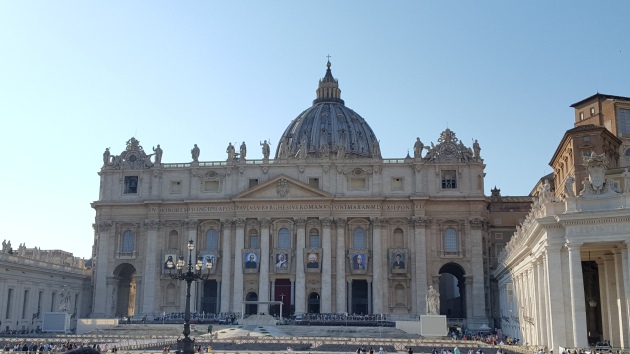 After a quick metro ride, we were at the Colosseum – it’s a massive structure, on the scale of modern stadiums – it is estimated that it could hold 50,000 to 80,000 people (it takes up 6 acres!). At almost 2000 years old, it is in remarkably good shape. I hadn’t realized before, but the Colosseum is not round, it’s oval shaped. It’s of course known for the gladiatorial shows, where gladiators would battle animals and other gladiators. Back then, gladiators were basically rock stars/celebrities (called gladiators because they would often use a sword known as a gladius). One other interesting point – if a gladiator fell in battle, the audience would ‘help’ decide if they should live or die. There is apparently some debate about this, but it seems if the audience member thought they fought valiantly and deserved to live, they would conceal their thumb and put their arm out; if they wanted the gladiator to die, they would put their thumb up and wave their arm in a slashing motion.

The Colosseum was also used for other events as well – when people were condemned to death, they would sometimes be thrown into the middle of the Colosseum, completely naked, and animals were released to eat them alive. The Colosseum also had trap doors in the floor with elevators where things could be lifted onto the Colosseum floor – these 24-28 elevators were used to lift decorations and animals onto the floor.

After the Colosseum, we walked around the Roman Forum. This is where the market and some of the government buildings (including the Senate) were in ancient Rome.

We made our way back to the hotel, and then went out to get dinner at the Trevi Fountain. Even though it’s not peak tourist season, the fountain was stilled packed with people.

We ended up having dinner at a great Italian restaurant, and set next to a nice young couple who lived just outside of London. A very successful start to our trip!

PS – apparently we just missed a freak rain/hail storm in Rome – guess we got lucky and picked the right days to travel!

My dad asked the following question:

The stonework and detailed statues and paintings give the impression of extreme opulence. I was wondering whether this extreme wealth was held by the religious leaders or just the royalty?

So, I did some reading to try to answer this question. It takes a bit to explain though, and things changed over time (since Rome’s history does span about 1000 years).

The Roman Kingdom was a monarchy that lasted from 753 BC to 509 BC. The King had vast powers, but there was also a Senate (which mainly served an advisory role). Social classes began to form, and ancesters of the members of the first Senate became known as patricians. If you held land, you were a plebians, and if you had little money and no land, you were a proletarii.

The Roman Republic, a Constitutional Republic, was founded when the Roman Kingdom was overthrown. However, those same social classes mostly persisted. Over time, people who made lots of money would obtain higher social status, and later on, the distinction between plebians and patricians basically disappeared (and money become the sign of social status). About 25% of the men could vote in elections, but there was a poll tax, so in effect, only the wealthier people could afford to vote.

As for who had the money, one of the estimates I read said that about 5% of money was taxed and sent to the government, 20% of income when to the top 1.5%, 20% of income went to the next 10%, and most of the rest of the people were basically working poor (many were farmers). The Romans also had slaves, who were treated as property.

Originally, Rome had a polytheistic (many gods) culture, partially based on the Greek gods (there were also some Jewish people, and Judaism was tolerated). Religion was seen as very important, and the government built large buildings and monuments to the gods. However, there wasn’t a separate religious class, and most priests weren’t wealthy.

The Roman Republic ended when Julius Caesar crossed the Rubicon river and started the civil war, which he won and became Dictator. In 27 BC, Augustus declared the beginning of the Roman Empire, lead by an Emperor (they left behind the ideas of democracy).

When Christ came along, the Emperor persecuted Christians. Christianity was later outlawed. In 313 AD, Emperor Constantine converted to Christianity, and it later became the official religion. The power and influence of the Christian Church grew, and a large church (also know as St. Peter’s Basilica, because it was were St. Peter’s tomb was) was built in 360 AD in the current location where the Vatican is now. That original church was destroyed in 1450, and the new St. Peter’s was later built in it’s place.

After the fall of the Roman Empire, the Church became more powerful, and eventually governed land, then known as the Papal States. This land was directly under the control of the Pope. Around 800, the Holy Roman Empire began (which controlled parts of Italy and modern day Germany) – it’s not clear what the relationship was between the Holy Roman Empire and the Papal States, but the Pope had considerable power. In my understanding, this is where most of the wealth of the Vatican came from – taxes and the control of land.

So in short, it doesn’t seem like religious leaders were very wealthy during the Roman Kingdom, Roman Republic, or most of the Roman Empire. During those times, various traders, military commanders, bankers, and other land holders made lots of money. In the late Roman Empire, the Catholic Church grew significantly, and as Catholicism spread, the power and wealth of the church grew. Later on, it controlled large parts of Italy, and also received money from the Holy Roman Empire.