After a long day in Southern France, we woke up pretty early again on Friday, August 17th to take a train to Northern France – Bayeux, France in the Normandy region in particular. Our train car was pretty empty, but in front of us was a pretty large group of Americans. It’s pretty easy to spot some Americans on trains, they often talk at a normal, or even loud volume, and on trains in France the social expectation is that everyone speaks quietly. On most trains, there’s almost complete silence – this group was pretty loud, so we got to ‘complain about the American tourists’. 😉

Once we got to Bayeux, my dad, who had been hot the whole trip, finally got some cooler air near the coast. Bayeux is a gorgeous little town, with a small stream running through it.  We started our day in Bayeux by getting some information and bus schedules, and then visited the large Bayeux Cathedral. 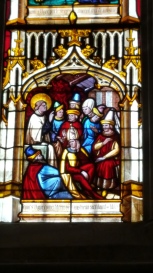 There was also a history museum next to the Cathedral that we stopped at – at one point, the building had been part of the Church, and then later on, a government building. They had some very old artifacts from the people that lived in Bayeux hundreds of years ago, a large art collection, a court house which lead into an old office that previously was used by priests, and tons of other things. Something quite impressive to me was their exhibit on lace – the region near Bayeux used to make lace for clothing and decorations – this was an extremely complex task, and at the museum, they had many of the lace patterns that were used, including one that was partially completed. I can’t imagine how many hours went into making something so delicate, and I’d never thought about how lace was made until that visit.

We then took a bus up to the American cemetery at Omaha beach. It’s a very somber place, with a very good museum that highlights the history of the D-Day invasion and some of the stories of some of the American soldiers that died during it. Along with an hour by hour breakdown of the time leading up to the invasion, the invasion itself, and the aftermath, the museum also had many pieces of Equipment that the soldiers used and carried. Outside, the cemetery is laid out beautifully, with meandering paths overlooking the ocean and monuments to the fallen soldiers.

For me in particular, it was the physical manifestation of the meaning of the word “alliance” – we fought in World War II along our allies in order to protect them and drive the Nazi’s out of their territory. There were many symbols there of the deep connection between France and America, including two statues next to each other symbolizing America and France, but the biggest symbol was all the gravestones of American soldiers buried there. 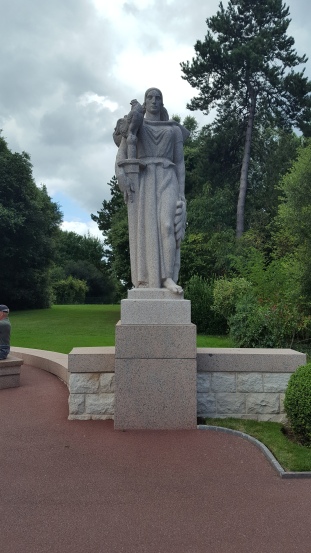 One of the quotes at the end of the museum really captured the essence of the memorial. “If ever proof were needed that we fought for a cause and not for conquest it could be found in these cemeteries. Here was our only conquest: all we asked…was enough…soil in which to bury our gallant dead.” 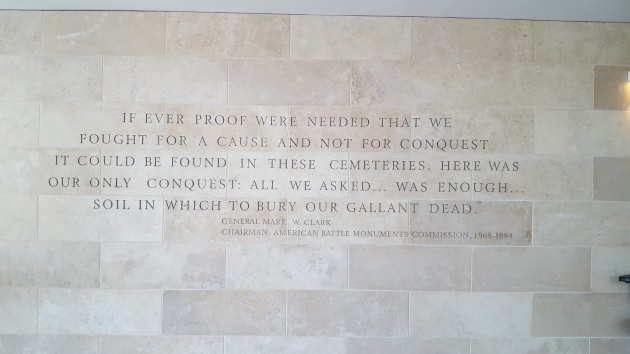 After our time at the cemetery, we went back to Bayeux to do some exploring and eating. 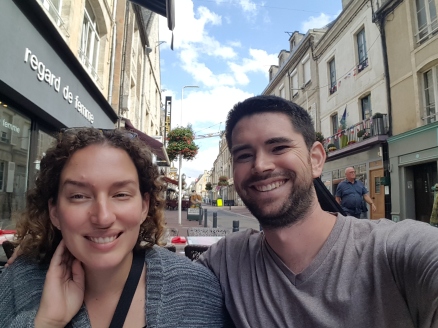 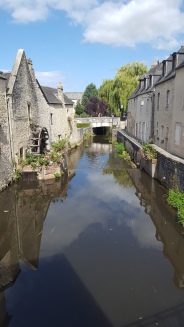 We then went into another museum, the tapestry museum. I had no idea what it was going in, but there was a 230 foot long tapestry made almost a thousand years ago that depicts the events leading up to the Norman conquest of England. In the tapestry’s telling, Harold, Earl of Wessex in England, was forced to take a loyalty oath to William, Duke of Normandy. When King Edward of England died, Harold took the throne and became the King of England, and in doing so, violated his oath of loyalty to William. Halley’s comet is seen in the tapestry, and is viewed as a bad omen to Harold. William and the Normans built a large army and sailed across the English Channel and in a series of battles (including the Battle of Hastings), William took over England and became King William the Conqueror (he was previously known as William the Bastard, so that’s a pretty big step up). 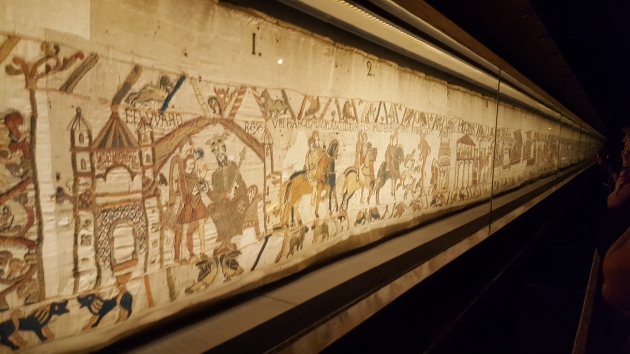 The tapestry itself has had an amazing history; it survived even when the Church it was in burned down, and it was lost for many years before being found again. At one point, Napoleon brought the Tapestry to Paris, to try to build support for invading England.

We ended the day walking around the town, the stream that runs through the town that really looks quite nice (and we even found a working water wheel!). Soon it was time to get to our train, and within a few hours we were back in Paris. Another amazing little trip, which we planned almost on a whim!