Hello everyone! Sorry for the huge delay, it’s been a busy few weeks!

On the weekend of June 23rd, Kelly and I had a great time visiting Bordeaux!

We took the TGV at 8 am – don’t worry, this time we were up early enough that we didn’t have to worry about missing the train. I downloaded a speedometer app on my phone to try to see how fast the train was going – I’m not sure about the accuracy at these speeds, but at one point, we clocked in at 212 mph (341 km/h). Most of the time we were hovering around 180 mph. 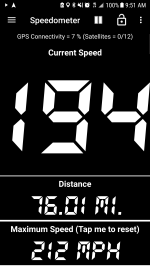 Once we got into Bordeaux, we had to find our rental car (which was harder than it sounds). We missed the signs pointing to the rental car area, and had to cross a bridge to get to the other side of the station (we later learned there was an easy underground tunnel we could have taken, oh well). We got our rental car, a Peugeot 308, and we were off!

Our first mission was to find some food for lunch. Kelly looked up a few restaurants as I drove, and once we got near the restaurant, we realized that the bigger challenge would be to find parking. We searched for about 15 minutes before finding an underground garage that worked.

By the time we parked the car, it was about 12:15 – our first wine tasting was a 2 pm at a chateau in Saint Emilion, a 45 minute drive away. That would give us plenty of time to eat (or so I thought). Kelly and I found a nice Italian restaurant which wasn’t too busy and we sat down and waited. And waited. A few minutes turned into ten, then twenty, and finally, the waiter (who was running around helping people, he wasn’t just being lazy) came around and took our order. About 15 minutes later I told him we had to leave in 20 minutes, and he promised the food would be out in time. Right when we pretty much had to leave, he brought us out our food (and topped off our wine glasses for free), so we ate as quick as we could, drank some of the wine, paid, and started running. So in a strange twist, our first wine in Bordeaux was from Italy!

As luck would have it, we got to Chateau Beaurang right on time. This particular winery has been operated by the same family since then 1950’s, and the daugther of the owner (Delphine) was the one who gave us the tour! We were supposed to be with a bigger group, but they didn’t show up, so Kelly and I got a private tour of their winery. The Saint Emilion region is known for wines that are mostly Merlot, with some Cabernet Sauvignon and Cabernet Franc (they don’t really grow Malbec or Petit Verdot in this particular region). Delphine told us all about the winery and the operations (they have ~20 acres of vines), which was pretty interesting – there was a bad frost in the Saint Emilion area last year which wiped out much of the grapes, but things are looking much bettter for this year’s harvest. We tasted two delicious wines, Chateau Beaurang and Joseph D’Aragon – and we got a bottle of the Chateau Beaurang.

After our visit, we went to the actual town of Saint Emilion which was incredible. There are churches and monuments that are over 800 years old (one of the towers dates back to the Roman empire), right along side people eatting, drinking, and of course, watching the World Cup (Belgium was playing at the time). Saint Emilion is also built on multiple hills, so some of the streets are lined with cobblestones (which were brought over from England and are over 500 years old). 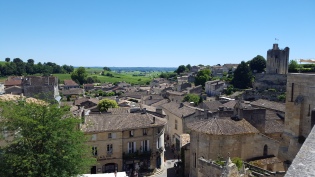 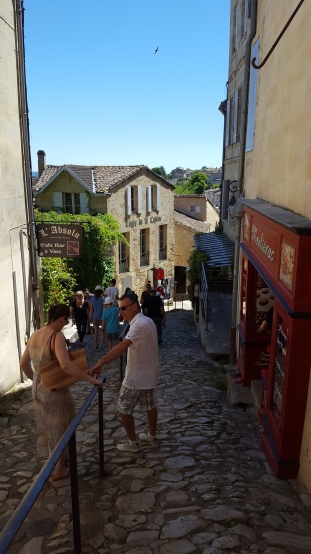 Then it was back to wine tasting – next up was Chateau Cantenac. Since they were hosting an art exhibit, we didn’t do a tour, just a tasting. We also got one of their wines (which was very good). For our final tour, we went to Chateau La Gaffeliere. It’s one of the “Premium grand crus” of Saint Emilion – it’s class B, class A is the absolute highest tier. Cantenac and Beaurang were family operations – and while La Gaffeliere is still owned by the same family, all their equipment is state of the art. During the tour, our guide explained that they actually have an optical scanner that scans each grape to determine size, maturity, freshness, and to look for imperfections – only the best of the best grapes are selected for their top tier wines.

The name “La Gaffeliere” actually comes from from the work “gaffe”, or stick in French. There was a leper colony near Saint Emilion hundreds of years ago, and the lepers would use a stick to help themselves walk and to beg for money (because they weren’t allowed to get close to other people), so they became known as La Gaffeliere. 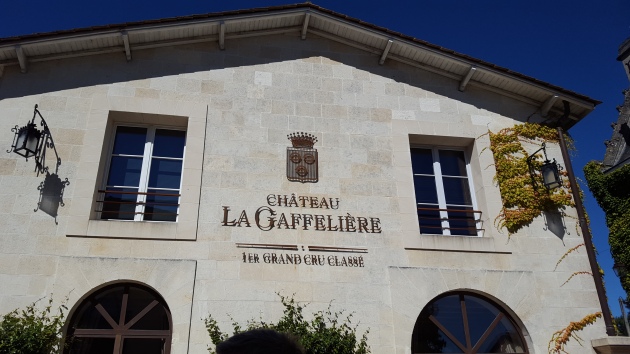 The family that owns the vineyard actually dates back to French royalty – Guillaume Malet was knighted for “distinguishing himself at the Battle of Hastings” in 1066. In 1654, the family name became “Malet Roquefort”, and today Leo de Malet Roquefort and his children manage the estate and vineyard. 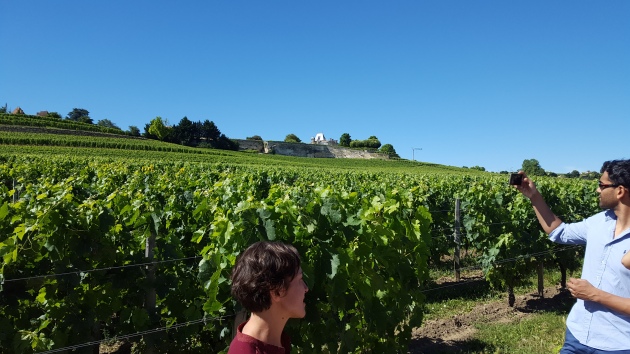 The wine there was easily the best we’d tasted that day – just a bit out of our price range. We then made the drive back to the city of Bordeaux, and had a nice dinner (with more wine of course) in one of the squares. I had a mental picture of Bordeaux as an older, smaller city, and while there are many things that are old (it actually has the second most historic buildings in France after Paris), it’s not a small city. It’s actually the 6th largest city in France, with 250,000 people living in the city and over 1 million people living in the metro area (about the size of Buffalo, NY). The city dates back to 567 BC, when a celtic tribe settled there. 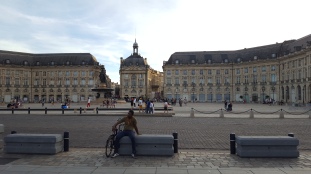 The next morning, we woke up early and drove to Arcachon – it’s a nice little beach town on the west coast of France, about an hour drive from Bordeaux. After getting some coffee and pain au chocolat (my favorite), we went to the beach. Well, not quite the beach. Right next to Arcachon is the Dune du Pilat – it’s a 2 mile long, 1600 foot wide, 360 foot tall sand dune – the largest in Europe! Kelly and I managed to climb to the top after a considerable amount of effort, and were rewarded with a great view of the coast, the town, and the surrounding area. 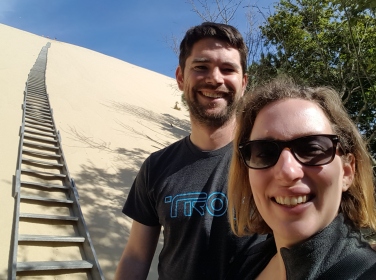 After we got back down (much easier), we went to a nice quiet beach – there were a few other beaches closer to the town which are much busier. We had a great day just relaxing (and trying not to get too burned!). We made our way back to the town of Arcachon and got some lunch, walked around the town, and went back to Bordeaux. 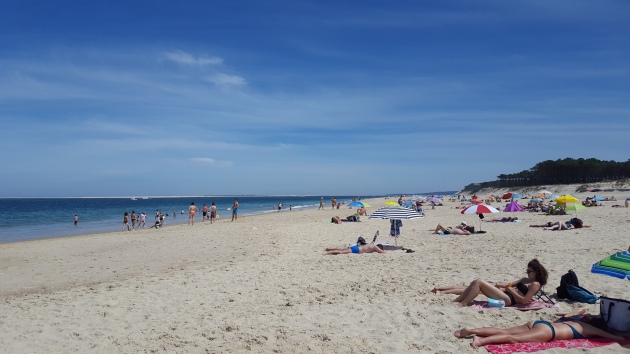 A few hours later, we were back in Paris, another great weekend trip in the books!