Recently, Jesse Jenkins, a PhD student at MIT studying decarbonization pathways, was blocked on twitter by Dr. Mark Z. Jacobson. Dr. Jacobson has made it a habit to block seemingly anyone who disagrees with him, but this time it was pretty absurd. Jenkins was trying to have a dialog with Dr. Jacobson about his claim that a 100% Wind/Water/Solar (WWS) strategy is the fastest, cheapest way to reduce carbon emissions. This is a claim that Dr. Jacobson has made repeatedly, but most other research in the topic disagrees.

Jenkins specifically pointed out that in Dr. Jacobson’s own studies, nuclear is cheaper than geothermal, off-shore wind, concentrating solar power, rooftop solar, wave power, and tidal power – meaning adding nuclear would make the plan cheaper. Jenkins also pointed out that Dr. Jacobson hasn’t compared his preferred pathway against others that include nuclear [1]. Jenkins made point [2] after point [3] about how other studies have shown adding nuclear makes plans cheaper and that even the Intergovernmental Panel on Climate Change (IPCC), the UN scientific authority on climate change, says excluding nuclear increases costs [4]. The entire thread (tweetstorm) is great, and can be found here and here [5,6,7,8,9,10]. (Sidenote, in this piece, I’m including the link to each tweet, followed by a link to a screenshot of it, like this: link [link to screenshot]).

Jenkins wasn’t attacking Dr. Jacobson; he laid out a clear and cogent argument for why adding nuclear is cheaper, and how nuclear has historically scaled faster than renewables. And at the end, Jenkins added an open invitation to work together with Dr. Jacobson on further research. And instead, Dr. Jacobson blocked Jenkins. But not only that, Dr. Jacobson repeatedly called Jenkins a zealot for supporting nuclear [11].

I’ve personally had a similar thing happen to me with Dr. Jacobson – I had a conversation with him on twitter in December of 2015 where I made the argument that we should keep existing low carbon nuclear operating for as long as possible, and at least then, Dr. Jacobson said “There’s an argument to be made for that. Most efficient to replace coal, gas, oil first.“[12] However, during June of 2016, it was announced that Diablo Canyon, a nuclear facility in California, would be shut down, and Dr. Jacobson said people, “Should cheer“[13] for its closure. I sent out a slightly snarky tweet with the juxtaposition of the two statements [14], and Dr. Jacobson claimed (without citing any numbers for the cost of relicensing or building the new sources) that it would be cheaper to build new WWS than to relicense Diablo Canyon [15]. I made the point that closing Diablo Canyon and replacing it with WWS would not actually decrease fossil fuel usage and carbon emissions, a restated the point that he made in December, that we should work on replacing fossil fuels. He responded back saying “You don’t know the first thing about solving the climate, air pollution and energy security problem. Stop pretending you do.” [16] And then he blocked me as well. 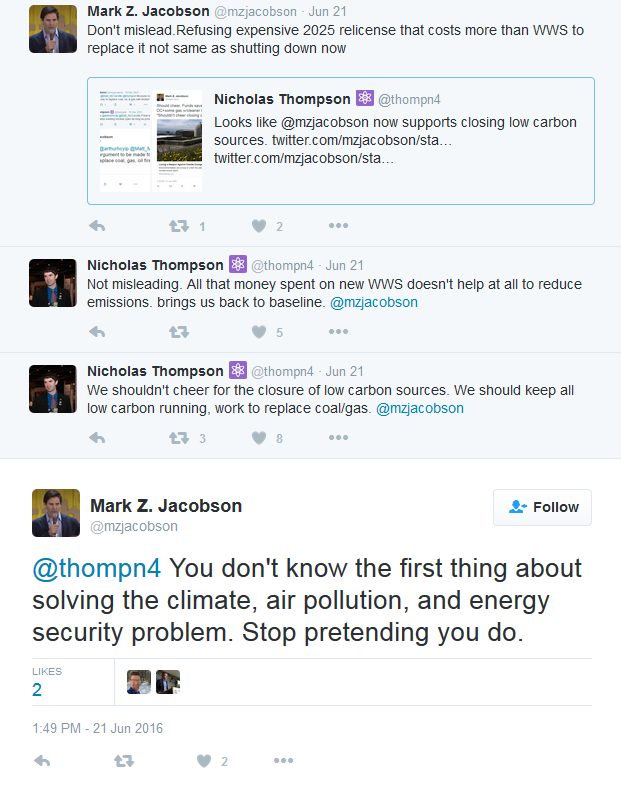 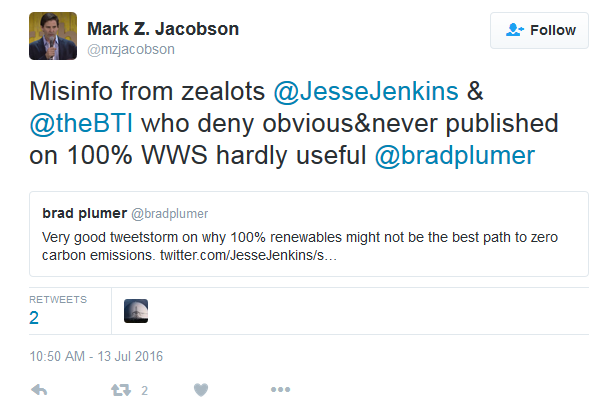 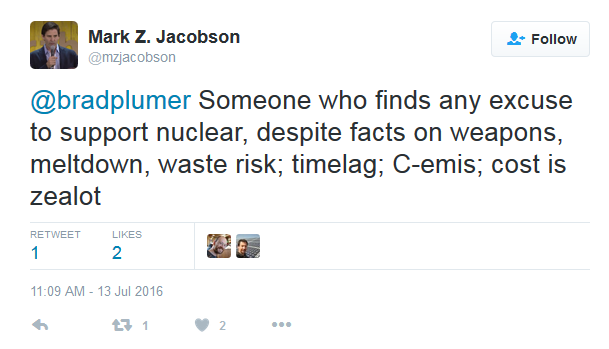 The definition of a zealot from Merriam-Webster is, “a person who has very strong feelings about something (such as religion or politics) and who wants other people to have those feelings: a zealous person“. In this context, you could say that someone who chooses to hold a belief despite overwhelming evidence to the contrary, and forcefully promotes that belief is a zealot. I’ve followed Jesse Jenkins work for a while, he does good work, is willing to debate with people about it, is willing to defend his work, and is willing to admit when he’s wrong. Because of this, I don’t think he’s a zealot as Dr. Jacobson claims.

And instead of engaging in thoughtful debate with an open mind, Dr. Jacobson ignores criticism and shuts down debates through blocking people. In fact, you can search Dr. Jacobson’s entire twitter feed for the words “wrong” or “mistake”, and in his almost 4000 tweets, he’s never admitted that he’s wrong or that he made a mistake. He’s always saying other people are wrong. According to Dr. Jacobson, the EIA is wrong [17], the IPCC is wrong [18], the Washington Post is wrong [19], Dr. James Hansen is wrong [20], the Breakthrough Institute is wrong [21], Bill Gates is wrong [22], Jesse Jenkins is wrong [23], I’m wrong [24], just to name a few. Dr. Jacobson clearly has a certain set of beliefs, and those beliefs seem to be unshakable, even when the other researchers or the IPCC disagree with him.

It’s my personal opinion that we’ll need both renewables and nuclear, along with policy changes (price on carbon, clean energy standards) and other solutions like demand response, storage, and electric vehicles if we are going to significantly reduce emissions. I don’t know exactly what role nuclear will play in the future, but it is currently playing a large role in many countries (including the US) and will continue to be the largest single source of low carbon energy in the US for many years to come. Prematurely closing this generation will result in higher emissions, something that is becoming all to frequent.

The biggest problem in my opinion is the lack of political will and political action for climate solutions. It is important to debate what the best solutions are. But when Dr. Jacobson purposefully blocks people and calls people names for trying to critique his work or engage him in a dialogue, he is actively fracturing people into two competing “teams”, one team supporting nuclear, the other against it; in reality both sides want the same thing, to solve climate change.

So to anyone reading this, please try to tone down the rhetoric, and really try to understand other people’s views. It’s the only way that we can find some common solutions and move forward, together.